(and the nearby Paradores)

This park is one of Europe’s largest fluvial wetlands, and a wondrous gift from Nature.  This area of 1,300 sq. kilometers was declared a national park in 1969, and UNESCO declared it a Biosphere Reserve in 1971.  It was then named a Human Heritage Site by UNESCO in 1994.

This incredible area began its like thousands of years ago as an estuary of what is now the Gudalquivir river.  Gradually filled in with silt and blocked from the sea by the building up of a huge sand berm that stretches for miles, it is now comprised of marshes, salt flats, extensive sand dunes, and scrub forest.

In past centuries, it was used primarily as a private hunting preserve for royalty.  It has always been a haven for wildlife; rare lynx, Fallow and Red deer, wild boar, , tortoise, and especially birds.  At any given time there are estimated to be 600,000 birds in the park – permanent residents and migrating species.  Flamingos, geese, ducks, gulls, plovers, sandpipers, terns, and scores of others.  It also has Spain’s largest concentration of Imperial eagles.

Because of the delicate natural balance (which is being constantly tested, pressured and threatened by human encroachment) of the area, it is one of the few National Parks that cannot be freely visited – and entrance into the park is strictly controlled.  There are several visitor centers set around the park’s edges.  You can arrange guided tours via four-wheel drive vehicles. As well, from each of these centers there are marked trails on which you can hike a ways into the park and observe the beautiful surroundings on your own.

Access is from three major areas that surround the park; Huelva, Sevilla, and Cadiz.

– From Huelva, you can enter via the La Rocina visitor center, the El Acebuche center, or the Palacio de Acebron center.  Each has fine exhibitions, slide and video, for the enjoyment and education of the visitor.
– From Seville, the Jose Antonio Valverde center (which is located in the middle of a marsh) is the entrance point.  Its exhibitions stress the marshland ecosystem.
– From Cadiz, the Fabrica de Hielo center is the entry point.

Directions to the above-mentioned visitor centers:

El Acebuche – take the A483 road south of Almonte until around 12 km. from El Rocio where a signpost at Km 29 points to the center. From this center there is a 5 km. trail into the park that has several ‘blinds’ set up for bird-watching.

From El Rocio you can also get off on the Matalascanas road about 500 meters from the village  and head into the La Rocina center. There is a 3 km. trail for hiking that originates here.

Seven km. form the above center is the Palacio Acebron which offers a 1.5 km. trail.

The Fabrica de Hielo (so named because it inhabits an old ice house) center is got to from Sanlucar de Barrameda via the Bajo de Guia district.

Another fascinating way to visit the park is by boat.  Out of Sanlucar de Barrameda (in every month but Jan.) sails the ship, Real Fernando.  It goes up the Guadalquivir for about 13 km. and stops at several spots along the way.  It provides a wonderful, educational, and unique way to experience the Donana.

Where to stay while visiting the park?

There are two fine Paradores de Turismos within easy access distance of the entry points into the Donana.  These are Parador Mazagon to the north of the park on the Huelva side, and the Parador Cadiz in Cadiz for access from the south of the park.

Located at the edge of the Doñana Environment Nature Reserve, the Parador faces the ocean above the spacious Mazagón beach, in the middle of a scruffy pine wood.  It is an ideal spot to enjoy nature and the blue waters of the Atlantic. The building has a splendid garden with outdoor and heated pools, a gym, sauna and Jacuzzi among other features. The interior is characterized by pleasant and welcoming rooms with decorative details which bring joy and brightness. Cozy bedrooms with terraces and beautiful panoramic views, comfortable living rooms and a splendid swimming pool complete its facilities.

This Parador occupies a lovely space on the edge of the ocean at the tip of a small peninsula on which is located the "oldest inhabited city in the western world"  – Cadiz, Spain.

The rooms of the Parador in Cadiz offer ocean views, and each has a balcony and large windows that fill them with the light off the Atlantic ocean.  From these same balconies, you’ll have panoramic views of the Bay of Cadiz and the Atlantic.  The Cadiz Parador is next to the Genovés seaside park which makes the area even more attractive and adds a welcomed feeling of tranquility.  Located in a residential area surrounded by palm trees, it also has exclusive access to a small beach.

Cadiz is famous for the quality of it seafood, and the restaurant at the Parador offers some of the tastiest dishes you’ll encounter anywhere in the city.  You’ll find the Parador Cadiz is well situated and within an easy stroll of the center of the old quarter, so walking off the effects of a good meal will be a pleasant task. 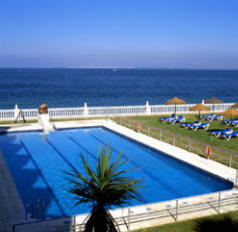 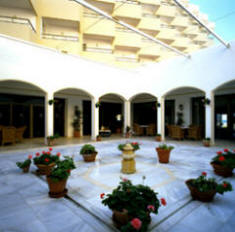 Cádiz, one of the oldest cities in all of Europe, was founded by the Phoenicians prior to 1100 BC.  Its former grandeur is a bit faded now, but it retains a friendly and somewhat ramshackle ambience that, along with its lively residents – the Gaditanos, is altogether agreeable.

Located on a peninsula, the old city is surrounded by water.  Strolling the waterfront promenade and watching the locals fishing in the early evening is an especially enjoyable way to pass some time.  Don’t miss the great seafood oriented tapas restaurants here – you’ll discover dozens of tasty little tid-bits you never dreamed even existed.

Interesting excursions from the Cadiz Parador include:

– The Museo de Bellas Artes is well worth a visit.

– The gold-domed old Cathedral is nice and has an interesting history.

– The Museo de Cadiz has some fine exhibits including 17th century paintings by the master Zubaran.

– Jerez de la Frontera is just a short drive north of Cadiz. There you can visit the famous sherry wine cellars, or see dancing Andalusian horses, of visit the museum of Flamenco.

– The Rock of Gibraltar makes a nice day trip.

– The town of Ronda is unique and well worth a visit, though you might want to move on and stay at the Parador there (with one of the most awesome views of any hotel in the world!).

– Puerto de Santa Maria can be seen from Cadiz and is a great coastal town to visit.  However, though it appears like you could almost throw a rock over there – to get there, you need to drive out of the Cadiz peninsula and around the bay of Cadiz.

Cadiz, Spain is one of those places in the world where the history is a palpable presence – you sense it at every turn.  After all, this is from where Columbus set off on his second voyage to the New World – which fact ties Cadiz tightly to the history of the rest of western culture.  The Parador Cadiz will provide you an excellent base from which to fan out and explore this fascinating city and its environs.

Combining a stay at either (or both) of these wonderful Paradores with a visit into the unique natural surroundings of the Donana National Park will provide a one-of-a-kind vacation experience.  Nature lovers and culture lovers – will have the best of both worlds.

* An article that appeared on the BBC news site might be of special interest to those who are visiting or have visited Donana.  Are the remains of Plato’s Atlantis buried beneath the mud in Donana National park?  That article is here: